Changing completely the subject, my flatmate and I decided to buy a car together to share the costs and have the possibility to avoid renting cars or subscribe to car sharing etc etc.

We started looking for a car in the usual websites like autoscout24.de or mobile.de and everything looked like a scam. Or people were asking too much for an old car or the cars were extremely cheap, in perfect conditions with some "little" imperfections like clutch to change, breaks to repair....something that will probably cost the same as the car to fix. However, the situation did not look very promising so we asked to a colleague whom we know is a little bit more expert than we could ever be in the car world and he told us that he has a friend (a mechanic) who is dealing with used Opel Corsa and  we can go check one weekend and see what we can find there.

After a couple of days we  decided to organize a visit to the shop and see for ourselves. Actually the mechanic had an used Opel Corsa that he and his colleagues were just repairing and that would have been ready in a couple of days. He said that he had to change a lot of parts of the car (engine, breaks, distribution chain etc etc ) and that he would ensure that it would have been in perfect condition soon. This was also the reason why he asked us a price a little bit higher than normal for a 10 years old Opel Corsa. Given that our colleague knew and trusted this man we decided to trust him too and give credit to what he said about the new parts he installed and reviewed in the car.

We left the mechanic shop telling that we will have thought about it and we will have come back once ready to try the car and give a definitive answer.

So in these days we checked how much could the insurance for a car like that be, what kind of expenditures we would have to face and at the end we decided that if the car test had been satisfying, we would have bought the car.

I have to say that I was a little bit worried at the beginning because even if the mechanic said that the car was in good condition, it was a 10 years old car and anything could happen anytime. Furthermore, we discovered a strange smell of burning plastic the first days we used it. I asked my colleague to help me check what could it be , I searched online for clues and at the beginning I could not find anything suitable. Then one day I found that given the new engine or new engine parts, could be that the protective wax around them could make that smell during the first 1000 km.

So my first long trip to Italy was a test drive and I have to say it went fantastically and the smell slowly disappeared. The car was also going faster than expected and was really stable. My previous car was a Fiat Panda 1000 cc and I remember that over the 120 km/h I was starting to feel like on the verge of taking off. The engine was a little bit "blocked" passing from 120 km/h to 150 km/h but this is also something that will change with time and use.


After 3 months and nearly 7000 km ( I went some times to Italy and back) I have to say I am really happy about it. It is a small car, you can park it everywhere, very maneuverable and up to now very reliable. Fast enough for our needs and to be a fuel propelled car, the fuel consumption is really low. I can go to Italy with one refuel....It mean 590 km with a 40 l tank. Pretty good!!!! 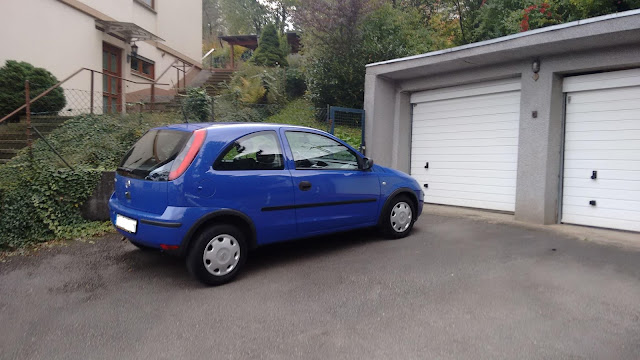